I don’t know if it’s because i have made it through passport control or that I have had a few to drink, but my nervous and anxious tick has settled down and I am now waiting at the gate.

It has come to quickly.  I still can not believe I am about to head overseas for the very first time.  I only booked this just over a month ago.  How have I just booked an international flight so quickly.  I always see other people do it and they prepare for months.  Maybe that is why I felt on edge, it was just to easy.  But here I am, about to embark, maybe I should relax and just enjoy.  My goals and dreams are starting and a new life begins today.

Bangkok at 6 in the morning feeling good and ready to start.  Alas that did not happen.  Given a middle seat allowed me no room to rest.  The plane lands at Suvarnabhumi Airport and after making my way through immigration with only a couple hours sleep  I wind up on a train heading towards Bangkok.  I have quite a few hours until i can check into my guesthouse so there is one thing i had to do as my first point of interest; Chatuchak market.  The place is massive.  So many tiny aisles and lane ways, so easy to get lost. These markets are open 7 days a week but the food sections are only up on Saturday and Sundays.  Being that I am in Bangkok so early, 8am  at this stage has its pros and cons.  There are not many people there, making it easy to traverse.  Though it also meant a lot of stalls are still being set up.  As I would find out throughout Thailand, smells shape this landscape.  Where be it from numerous food vendors to smells not so favorable.  But the hard truth is, that this reality in this part of the world.

I’m tired, exhausted and my clothes are drenched from the humidity.  I have explored a bit of the city, weaving through countless taxis and tuk tuks trying to get my business.  Me walking around with my bags may have been a giveaway that I am a tourist.  I eventually end up at my destination.  A well needed shower (and beer) later I collapse for 12 hours.  I did have have plans to go to the Chinatown markets for dinner but this was an instance where my brain over-ruled my stomach.

MONKEYS.  I am assuming I yelled that loud enough to get your attention.  The plan for today was as follows: Lopburi and then travel back to the ancient city of Ayuthaya.  Like most good plans this should be pretty easy.  What i really didn’t expect was for the sun to completely mess with me.  It wasn’t the heat, or the humidity.  It was the sun itself.  It’s a soul sucking succubus.  But I guess we kinda need it so i wont complain to much.

The first ruins (  Wat Phrasi Rattana Mahathat  ) I get to explore are quite impressive, right across the street from the train station.  I have it all to myself bar a few people which is really odd as it is the most impressive set of ruins in the town.  I guess monkey temple is more appealing, because monkeys.  Having such impressive ruins right in the middle of suburbia is quite amazing and i take in as much of the history as I can before I move on.

I get to Phra Prang Sam Yod.  It is what it is, an ancient temple inhabited by Crab-eating Macaques.  I am warned as I enter  to pack away my sunglasses, which, based on precautionary tales of travelers past, is probably a wise idea.  Without knowing much about the history of the monkeys I can not say how wild they are but regardless these are the largest of the urban wildlife I have come across and I am overcome with excitement.  And also without doubt the most dangerous.  They are not shy at trying to get a feed from an unsuspecting passerby.  Fortunately this didn’t happen to me but I can not say the same for the two young German ladies who got a bit to close.  I keep wandering, avoiding traffic and monkeys and taking in the sights of more, yet smaller, ruins scattered around the town.  After a small rest under a tree at Wat Puen – an ancient Buddhist temple – taking photos of a very active jumping spider to the delight  and confusing to the passing locals, I return to the train station for  another 3 hour trip back to Bangkok.

Back at the guesthouse I get some rest with a bit of disappointment that I didn’t keep on my plan to visit Ayutthaya. I knew I had to to make the most of my night which was again try to get  to the markets in Chinatown.  Now as I was later made aware, Mondays are cleaning day, as in the streets get cleaned, thus, the markets are not open.  Second night in and my plan to get to these famous markets are thwarted.

As my last day in Bangkok arrives I decide to spend it just taking photos.  There is a philosophy when touring that you shouldn’t see your adventure through the lens of your camera.  Whilst i see the merit in this, I am at the end of the day a photographer.  It is who I am.  By this stage I have experienced this city using my senses but now my camera had to take over.  I honestly don’t know where where to start.  I have no plan.  No idea of what photos I want to take.  I guess like most of my trip I take it as it comes.  It;s hard to avoid looking like a tourist here, especially on your first trip.  But with a camera around your neck it becomes more obvious as you randomly stand next to the street snapping 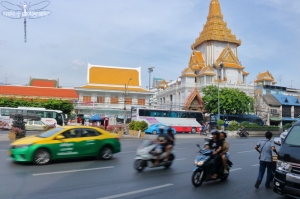 away.  It is a pressure I still need to overcome.  I can photograph  a tree for hours but in a busy street I am aware I’m being watched.  But the city doesn’t disappoint as there is so much going on. To much though?  As most of my work is very minimalist it takes a lot to really capture a picture.  It is then it dawns on me that you cant capture this city as a series of photos, but you must take a series of photos to capture stories.

As evening approaches I know this may be my last chance to get to the Chinatown markets.  There are somethings that I let slide for not seeing but to miss these would feel like missing out on a large piece of myself.  So I make it down and i finally find myself in the middle of it.  The six lane main road is cut down to four.  I take as many photos as I possibly can of this hectic yet controlled scene. 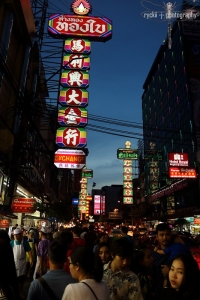 Before the smells and sights overcome my senses I knew it would be exactly what i was after.  Each street vendor selling their specialties, from pad thais to curries, fruit juices and coconut juice straight  from the coconut itself.  The shell which is just hacked into mere seconds before being given to you.  I watch as a girl no older than 14 swings a blade into the shell, making me dread a missed swing.  But she is a seasoned pro.  This is not her first foray in selling this kind of thing to stupid foreigners.  Many of the carts sell the same things which makes it hard to know where to settle.  the general rule is eat where it is the busiest.  I decide to break this unwritten rule, I want a noodle soup, duck noodle soup.

And this lady delivers.  Its not busy, not fancy.  Its the only thing on the menu and she smashes it.  Second unwritten rule, if there is only one thing on the menu, it’s going to be amazing.  I continue around picking up snacks, chicken on sticks, dumplings etc.   Amongst the vendors are people selling  durian.  This I needed to try.  The king of fruit they say, it’s legend is larger than the spiky fruit itself.  Durian has always been on my list of things i need to eat at least once.  It’s a fruit that devides people.  I was hoping to be on the side of love.  Unfortunately I have been left straddling the fence.  I actually didn’t mind the smell.  The taste however threw me.  Maybe I was thrown as I didn’t expect what was to come.  Rotten onion custard is probably  the best way to describe it. I wasn’t an immediate fan, but i like that.  I think foods need to make you think.  It’s not just about the taste, it needs to ask questions to yourself about flavours, textures and your place in the universe. The all mighty durian certainly achieved that.

The next morning I’m flying out visit other areas of this beautiful country.  As always I am leaving to get to the airport early, it’s just easier that way.  Plan was get to airport, check in and relax with some breakfast.  As i check in I am told that my flight has been canceled.  The fact that I’m early means i can catch an earlier flight instead of of waiting 8 hours.  The con being that i have 20 minutes to get through security and run through the airport just in time to board.  I guess that’s the thrill of travel.  Without it you may have a relaxing trip, but where is the story.  A huge part of traveling has been retelling your ventures to those when you get home.  But like all intriguing stories you need ups and downs, whether it be recreating a scene out of Seinfeld, or confusing your taste buds with new tastes.  This for me makes traveling and i wouldn’t want it any other way.